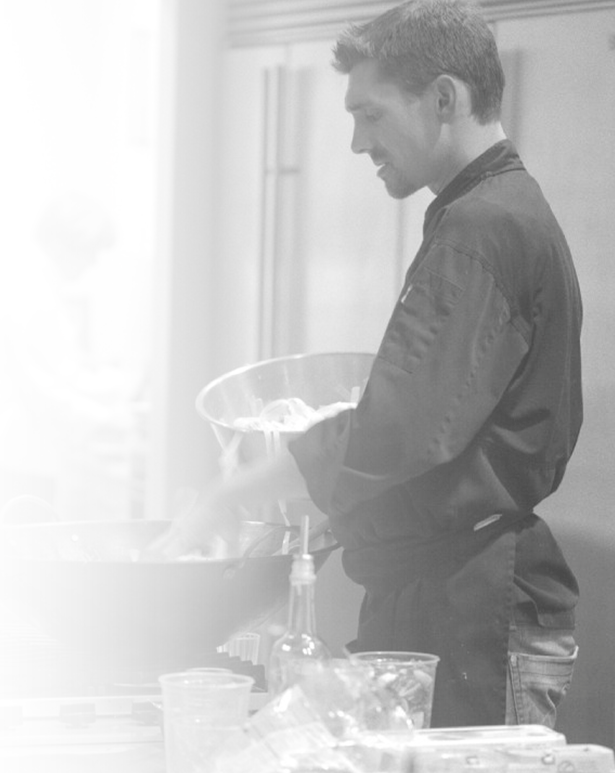 A native of rural Wisconsin, Scotty Wagner has a diverse range of hospitality credentials that include studies in International Business & Linguistics from UW-Madison, and an Associate Degree from the prestigious California Culinary Academy. He has held positions worldwide with multi-million dollar enterprises as an International Marketing Director, Director of Sales, Vice President, Food & Beverage Manager, General Manager, Sous Chef, Pastry Chef, Chef de Cuisine, and Executive Chef. As Owner/Executive Chef of ChileCo Catering, Scotty was recognized by Catersource Magazine as Southern California’s Top Green Caterer of 2008. San Diego Magazine named ChileCo the Top Catering Company in 2009 and 2010. Chef Scotty was awarded one of San Diego’s “Top 50 People to Watch”, and as an accomplished chef, he has personally cooked for the likes of Justin Timberlake, Matthew McConaughey, Kobe Bryant, Robin Thicke, Seth Macfarlane and 3 star Michelin Chef Yannick Alleno - just to name a few.

As an entrepreneur, Scotty has created and developed every aspect of four F&B establishments in Southern California including a 15,000 sq ft. multi-plex with a fine-dining restaurant, patio bar, casual bistro and nightclub, located in the heart of San Diego’s Hillcrest neighborhood. Scotty has an aptitude for management and for streamlining business operations and an interest in developing sustainable food sourcing. In addition to the positions he has held, he has been an independent Food & Beverage consultant, designed menu’s, hired and trained managers and staff, written sales and marketing campaigns and implemented leadership and client retention programs. Most recently, Chef Scotty has worked as the executive chef for Over Yonder Cay, an exclusive private island in the Bahamas.

Scotty is a passionate environmentalist. He has served on the board of Slowfood Urban San Diego and founded ECOS (a Wisconsin student environmental group). He has worked with local growers and vendors to promote sustainable sourcing for his business and clients and developed an all organic & locally sourced food & wine pairing dinner to educate community members about sustainable living choices. Scotty routinely dedicates his time to notable charities both local and national and has personally trained over fourteen chefs many of which were participants in the Los Angeles Job Corps culinary program.

Creative writing is a passion. In addition to his blog, the Word of Chi, his articles have appeared in national and local magazines, including, Wine & Jazz, Ceremony, Exquisite Wedding, San Diego Style Weddings, Rage, San Diego Union Tribune – Street, Pacific Magazine, and the 2009 edition of Culinary Careers. Scotty is a nature lover in all of its many wonders, including gardening, fishing, camping as well as the occasional “dance like nobody’s watching”