Currywurst is a fast food dish of German origin consisting of steamed, then fried pork sausage cut into slices and seasoned with curry ketchup and is frequently served at German ‘Imbissbuden’ and from food trucks. The invention of Currywurst is attributed to Herta Heuwer in Berlin in 1949 after she obtained ketchup, Worcestershire sauce and curry powder from British soldier. She mixed these ingredients with other spices and poured it over grilled pork sausage. Heuwer started selling the cheap but filling snack at a street stand in the Charlottenburg district of Berlin where it became popular with construction workers rebuilding the devastated city. She patented her sauce, called Chillup, in 1951. At its height the stand was selling 10,000 servings per week. She later opened a small restaurant which operated until 1974. 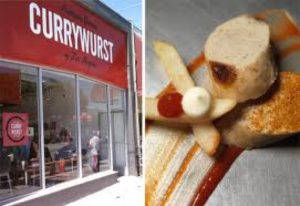 Today you’ll find that Germany sells an average 800 million servings each year, certainly giving McDonalds a run for the money and now this little endearing pubfare is working it’s way onto menu’s in the United States and in fact, I discovered a Currywurst store just around the corner from my home in Los Angeles appropriately named “Currywurst.”currywurst plate

Owner, Kai Loebach has kept his business model fairly simple: Quality ingredients, everything made from scratch, and customary recipes of Bavarian boldness. This weiner joint is snuggled up between some rather non-descript buildings directly across CBS studios parking lot on Fairfax Avenue. It is here that you will find the spirit of Oktoberfest 252 days a year serving up some wicked delish Hungarian Sausage drenched in full bodied, lick your momma’s left hip, belching Berliner, Coronel Mustard yellow Curry. The fries are for real and come with the upgrade options of minced garlic, chipotle mayo, curry ketchup, and. . . . I forget the rest. Service was nothing short of friendly which made it mostly forgivable that they forgot my order of sauerkraut. I wouldn’t go so far as to say this is fast food spot as the American definition of fast food typically is completed in less than 3 minutes and this was more like 12-15 minutes; nevertheless, it was well worth the wait and I’d recommend this place to anyone who loves Sauerbraten and everyone that likes a good sausage (Note: I wouldn’t recommend this spot for vegetarians or vegans)

Any cookies that may not be particularly necessary for the website to function and is used specifically to collect user personal data via analytics, ads, other embedded contents are termed as non-necessary cookies. It is mandatory to procure user consent prior to running these cookies on your website.